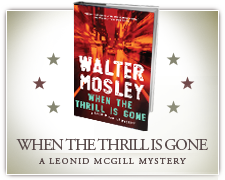 One of my favorite writers in the universe is Walter Mosley, mostly known for his bestselling Easy Rawlins detective series, which adds a new twist to the hardboiled crime genre by making the lead character a black man in post-World War Two Los Angeles. More on the brilliance of this series later.

The thing I love about Mosley is that while his primary success has come from genre-writing—detective stories, he refuses to be pigeon-holed. He writes short stories, YA, nonfiction, and sci-fi. Blue Light and Futureland are his two science fiction works to date. Both have received middling reviews. Both might never have seen the light of day had Mosley not already been a marketable brand.

Personally, I couldn’t make it through Blue Light. I found it kind of lousy.  And I love me some Mosley.

But, I so respect Mosley for doing his thing. He’s an admitted science fiction fan, so he took a shot at writing science fiction. Because he wanted to.

Here’s an excerpt from a Bill Moyers PBS interview with Mosley:

"I didn't start off being a mystery writer. I became that. And when I wrote, DEVIL IN A BLUE DRESS, I didn't know it was going to be a mystery. It just was. I write mysteries. I'm also a science fiction writer. I'm also a writer of non fiction. I'm also a literary writer.
There's many things that I am. And all of those things come together at some point. If somebody wants to limit me, you know and they'll say, 'Well, this is Walter Mosley, the mystery writer.' I don't like that. Because I do many things. So why do you pick that one thing? And then it's always an economic reason. 'Well you sell more of these books than you those books.' Not a good reason."

Posted by Tom Llewellyn at 6:23 AM