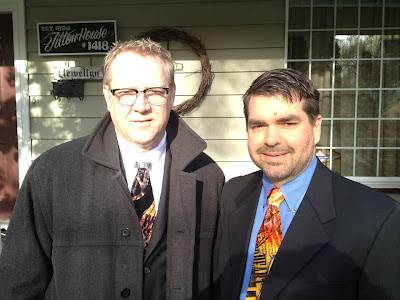 Last Tuesday, I had the honor to speak at TEDxTacoma--a localized version of TED. I really had no idea what to expect. I didn't know most of the speakers, saw a few on the docket I frankly don't respect, and was stressed about my own part.

Luckily, I was speaking with my good friend, Lance Kagey. Lance and I talked on using guerilla arts tactics to help get your message heard.

So how was the event? It was amazing. Not all the speakers were incredible, but many were. I was challenged and inspired and brought to tears. I felt connected to people who were, for the most part courageous enough to be honest--to reveal their true selves. I was enthralled by the visions of what was possible--from rethinking local forestry to connecting small businesses.

So kudos to the organizers. Can't wait to see it again next year. Oh, and Lance and I lit our ties on fire.
Posted by Tom Llewellyn at 7:30 AM

geat pic! When will we see the video and tie burning?