What is teen noir? And why should I care?

My recently completed manuscript, A Matter of Life and Seth, takes great inspiration from the classic noir stories of the 1930s and 40s, then updates that style into present day, with a teenaged hero.

So let's spend a few minutes on a noir primer.

Most people associate the term noir with films, particularly the shadowy, pessimistic crime movies of the 1930s, 40s and 50s, such as Murder, My Sweet, Double Indemnity, The Maltese Falcon and my favorite, The Big Sleep. What defines these movies as noir? As this is a style created by countless directors and actors, there's no truly accurate definition, but here are some typical characteristics of a noir movie: 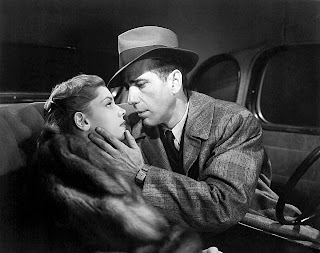 Check out this list of Top 50 Film Noir titles, as selected by IMDB users:

Where did film noir come from?

It came from books, of course. When we move over to literature, the name changes. We call this style Hardboiled Crime Fiction.

Imagine you were a mystery fan in the 1920s. Most of your choices were in the style Agatha Christie or Arthur Conan Doyle--well-mannered murders that occurred in a conservatory with a candlestick. The murderers were ladies and gentlemen who always paused in their killing during afternoon tea.

American crime writers kicked this stuff out the @#$%ing window and began writing in a style that actually considered the kind of people involved. Murder is a desperate act, performed by desperate men and women. This new style reflected that. It wasn't polite.

Suddenly, you had Raymond Chandler a writing about criminals who packed heat, slept around, drank too much, shot up heroin and carried dirty pictures in their wallets. James M. Cain wrote about a drifter who murdered his landlord so he could make off with the guy's wife. Dashiell Hammett's characters threw around racial slurs, slapped women and left a wake of dead bodies.

The masters--like these three--wrote in a truly American style--with short, sharp sentences, language full of street slang, and a taste for violence. But they also wrote with a point. They had something to say. Amidst the killings, their characters talked about the human condition, about moral struggles, about love and mortality.

Hollywood noticed. Many of the best noir movies had their start as the best hardboiled crime novels.

That's enough for now.
Posted by Tom Llewellyn at 6:06 AM